⚠ THE PALAIS GALLIERA IS TEMPORARILY CLOSED FOR MAJOR REFURBISHMENT ⚠

THIS WORK IS TO TURN THE VAULTED BASEMENT INTO EXHIBITION GALLERIES, IN ORDER TO DOUBLE THE SIZE OF THE MUSEUM.

DURING THE CLOSURE, FOLLOW US ON THIS WEB SITE AND ON THE SOCIAL NETWORKS!

Palais Galliera is saddened by the passing of photographer Peter Lindbergh, who has had a profound impact on the history of fashion photography over the past forty years.

Since his first campaigns for Comme des Garçons in the 1980s, Peter Lindbergh has become one of the most prolific in both the press and advertising.

His style is essentially defined by a powerful black and white, with high contrast, expressionist and cinematographic character.

The universal values conveyed by his photographs (realism, absence of pretense and artifice, emotion that appears in the poses and sublimated looks of the greatest models), have influenced several generations of photographers and make him one of the most renowned artists in the whole world.

"When Peter Lindbergh came to Palais Galliera, accompagnied by his dear friend Paolo Roversi and his team, his loyal knights, them. He filled the room with his legendary talent and kindness, with his strength and his restlesness, with his generosity and humour. He was eager to know, to see, to experiment and he discovered every fabric, pleat and form with utmost respect and admiration. We were so thrilled and honoured. It was his birthday and one of the best days of my life. Palais Galliera will always honour your legacy, and I will celebrate your memory every 23rd November, King Peter." 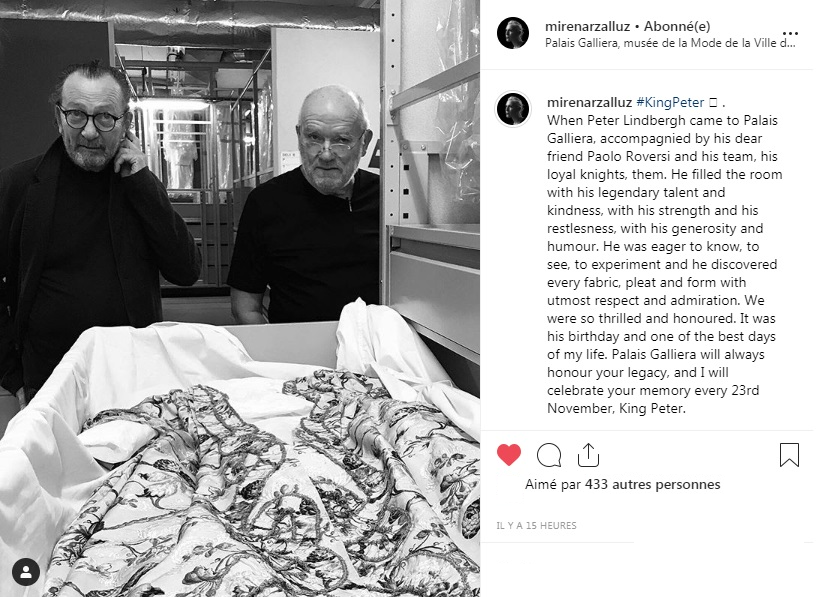