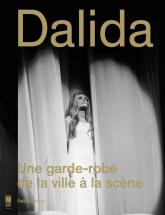 Dalida, her Wardrobe On and Off-Stage

The Palais Galliera pays homage to Dalida with an exhibition of her wardrobe, which was recently donated to the museum by her brother Orlando. Dressed by the greatest designers both on and off-stage, in haute couture or in prêt-à-porter,Dalida has remained an immensely popular star. Her wardrobe always followed the movements of fashion, but it also reflected her artistic development.

Dalida was a touching and impassioned figure and she has remained an immensely popular star. The Palais Galliera pays homage to her with an exhibition of her wardrobe, which was recently donated to the museum by her brother Orlando. She was a fervent lover of fashion and prepared to wear everything: from 1950s New Look dresses by Jacques Esterel to a Balmain’s seventies pinafore dress; she was chic and understated in Loris Azarro, dazzling in sequined disco outfits by Michel Fresnay in the 1980s, classical and timeless in Yves Saint Laurent rive gauche, and then there was Jean-Claude Jitrois who said dressing Dalida was ‘like dressing the stars for the Cannes Film Festival’.

Dressed by the greatest designers both on and off-stage, in haute couture or in prêt-à-porter, Iolanda – Miss Egypt, with the dynamite looks, became Dalida and had a huge hit with Bambino at Bobino, wearing a Hollywood-style red, strapless gown designed by Jean Dessès. This is the dress that sets the tone of the exhibition; it greets the visitor in the Museum’s salon d’honneur, setting the scene for the singer’s early career and her rise to fame: little dresses, stage dresses, photographs, record albums, the ethnic looks and the hippie looks. Dalida was archetypally Mediterranean – sunny and tragic, with a languorous drawl to her voice. A clearly defined waist, shapely hips and bust, her bare shoulders, the small of her back – everything about her was dazzlingly beautiful. And sophisticated. Her stage dresses, her make-up were like a second skin – she was born to perform. The show business side of her wardrobe is displayed under the gilded frescoes of the grande galerie: exotic gowns, leather, black and gold, and then, in the west gallery (galerie Ouest), the clothes she wore off-stage – set out in a display of pure Parisian elegance: coats and capes, in black and gold and leather.

Her wardrobe always followed the movements of fashion, but it also reflected her artistic development. As her career progressed, she sang beautiful versions of songs by songwriters whose work drew out her great sensitivity and also her brittle quality. The young girl from Cairo, who had dreamed of being a film star, saw her dreams come true; her beauty transferred flawlessly to the silver screen. And so, the exhibition ends in the salle carrée with film costumes and screenings of extracts from her movies. 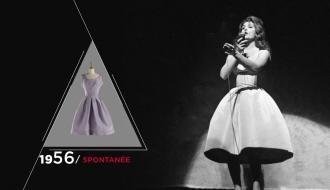