Established under the Constitution of Year III of the Revolutionary calendar (1795), the Institut de France was a five-part regrouping of the royal academies that had been shut down two years earlier. Throughout the 19th century its members represented the nation's intellectual elite and the reception ceremonies for new members were among the major events for Paris society.

Since its foundation the Institut's members have been wearing a civil uniform of black wool broadcloth embroidered with olive branches. Still worn today, the famous 'green coat' is a poetically anachronistic embodiment of a timeless, enduring institution.

While exemplifying the genre, this coat, once belonging to the famous Romantic poet and playwright Alfred de Musset (1810–1857), has very moving associations: Musset, the archetypal bohemian artist of the 1830s, ultimately became one of the Second Empire's 'official' artists and a provider of commissioned plays to the Court; first worn when he was received into the French Academy in 1852, his coat is now a melancholic symbol of the embourgeoisement of an entire generation. 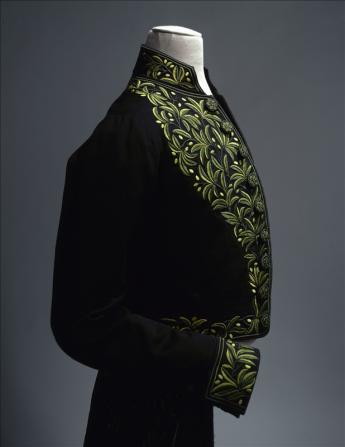