Many people see Jean Paul Gaultier as the archetype of the fashion designer and, since 1997, of the great couturier. Media coverage has made him as famous as most rock stars and as readily identifiable as Karl Lagerfeld or Charlie Chaplin: a brand in his own right. His aesthetic touch is quintessentially that of the 1980s and 1990s, an era which, in a sense, he helped to shape by stylising street fashion. His favourite sources of inspiration are the haute couture and popular culture of a Paris dreamed up by between-Wars cinema. Like Jean-Paul Goude during the same era, he delighted in every kind of mix, be it ethnic, cultural, social or period. His masters are Pierre Cardin (for whom he once worked) and Yves Saint Laurent, a subject of frequent references and tributes on his part.

The Bombshell Breasts dress,  with its wittily aggressive femininity, is especially typical of his 1980s work. The velvet suggests the world of couture, while the conical breasts push 1950s notions of glamour to a pinnacle of gleeful absurdity. There is also an allusion here to another moment in fashion history: Yves Saint Laurent's African collection of 1967, in which conical breasts referenced Bambara art. And maybe Gaultier is harking back, too, to the cardboard cones he used to add breasts to Nana, the cuddly toy of his childhood.

The iconic quality of this dress did not go unnoticed by Madonna, who commissioned a stage costume with the same bust line for her Blonde Ambition Tour in 1990. And so an unmistakable silhouette went on to become the emblem of an entire epoch. 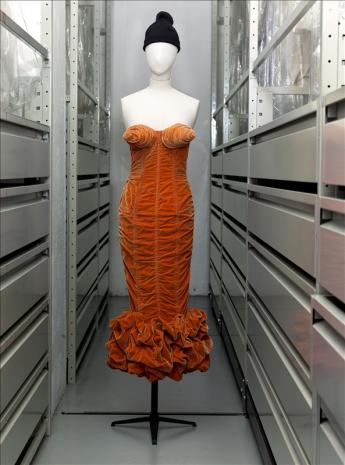