This model belongs to none of Jean-Charles de Castelbajac's collections: it was commissioned from him by singer-actress Elli Medeiros for her music video A bailar Calypso. Medeiros, one of the museum's most regular donors, has commissioned numerous stage costumes from Castelbajac, most of which are now in the Contemporary Creations collection.

Medeiros and Castelbajac are old friends and their empathy is evident in these different models. In some cases they collaborated on the design: Castelbajac loves working in tandem as he turns the story of a song and its singer into a garment.

The hand-painted silk faille 'Calypso' dress is covered with traditional Latin American motifs chosen by the Uruguayan singer and intended to ward off the evil eye or bring good luck. The drawings and colours are typical of the Castelbajac style; and although the overall shape of the dress, with its high waist and early-60s underskirts, is out of character, it fits perfectly with the singer's taste and the spirit of her song. Moreover, the placing of the waist and the flare of the skirt helped conceal a state of early pregnancy – which also explained Medeiros's choice of protective motifs. 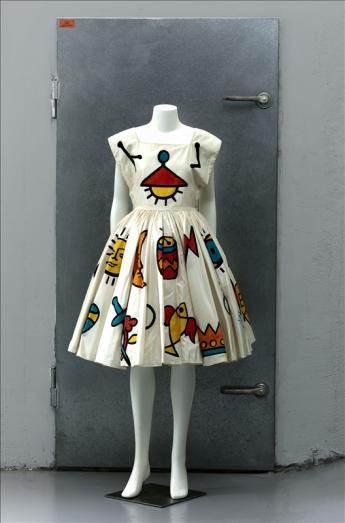