Coat of a Grand Marshal of the Palace

Very soon after the founding of the Empire on 18 May 1804, Napoleon re-established the 'Etiquette' of the Ancien Régime, which required members of the new Court to wear official costumes whose appearance was strictly prescribed. For attendance at Court ceremonies holders of an official post – in this case the Grand Marshal of the Palace – were to wear a coat matching their function. Those not holding such a post were to wear a Court coat.

The posts concerned were honorific and the holder had to order and pay for their coats themselves. The regulations laid down the type of fabric, the cut and the materials and size of the embroidery. The Grand Marshal's coat was based on the cut of the 'Petit Costume' designed by Isabey and worn by the Emperor at his coronation on 2 December 1804. It had to be made of red (« amaranthe ») silk velvet, with silver embroidery. These obligations were far from arbitrary: they were the emperor's (successful) means of reviving the luxury industries undermined by the Revolution. This item from the Palais Galliera meets all the specifications and is known to have been worn by Marshal Bertrand, a loyal follower of Napoleon, who was appointed to his post on 18 November 1813. 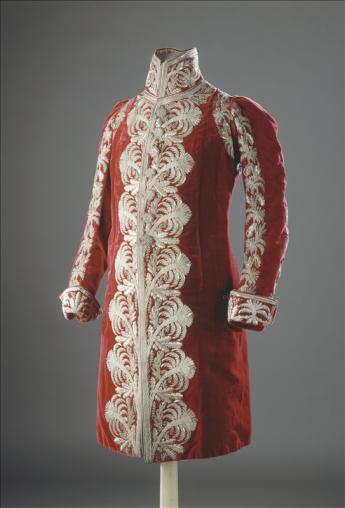