Born in 1883, Gabrielle Chanel opened her first hat shop in 1910 at 21 rue Cambon. In 1913 in Deauville, she offered for the first time flexible jersey suits which, as they did not require a corset, revolutionised women's lifestyles. The first fashion house was created during the First World War in Biarritz before opening in 1918 in Paris. A major figure of the inter-war period, she closed her house in 1939.

Faced with the triumph of corset fashion dictated by the new look proposed by Christian Dior in 1947, she reopened her fashion house and presented her first collection on February 3, 1954 at the age of 71. At the antithesis of her competitors, she presented creations that were supple, fluid, light and once again liberated women's bodies.

Few museums can boast of preserving pieces testifying to the return of the seamstress during the 1950s.

This strapless dress dates from the Autumn-Winter 1957-58 collection. Documented by a photographic report published in the magazine Jour de France on August 10, 1957, it was named "The most applauded dress: chiffon, velvet, skilful drapes". Made of black technical gauze, Gabrielle Chanel's emblematic colour, simple bows and velvet ribbons hold the drapery at an angle. It is worn with a stole of the same material and is embellished, during the fashion show, with a long necklace of pearls weighted with a cross, cleverly placed on the back by Gabrielle Chanel, as a surprise effect. 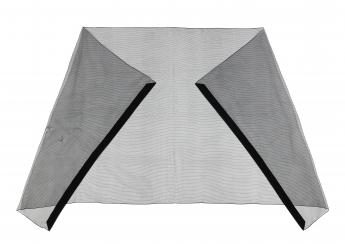