In 1972, Jean-Charles de Castelbajac joined the Créateurs & Industriels group founded a year earlier by Didier Grumbach. The designers involved – among them Issey Miyake, Thierry Mugler, Christiane Bailly, Michel Klein, Emmanuelle Khanh and Adeline André – were able to put their own names to highly personal collections, and this brought radical change to the fashion landscape: creativity was no longer exclusively restricted to haute couture.

Castelbajac's extremely individual approach to fashion is particularly representative of this generation, yet he has always worked within his own strict set of rules: simple geometrical shapes, primary colours, natural or tweaked materials. After working in a plain-fabric minimalist vein in the 1970s, he began looking into ornament in the 1980s, but always using patterns of his own design: in his entire career he has never bought printed fabrics. His 1981 collection featured printed texts and in 1982 he called in artists like Ben, Garouste and Combas to paint his garments. In 1983 he began his series of 'tribute' dresses painted by Israeli artist and creator Eliakim, offering the same challenge as Magritte: are these dresses or pictures?

This 'Coco Chanel' dress is from the first series of tributes, which saw Castelbajac bring together a miscellany of characters including  Mickey Mouse, Louis XVI and Jackie Kennedy: historical and fictional figures from his personal pantheon and the collective imagination. Painted in acrylic on gazar, these portraits came to life as the models moved along the catwalk. As here, some of the dresses were overlaid with black silk muslin, and what at first looked like a Surrealist joke took on remarkable depth, thanks to this transparent veil and its evocation of time and death. 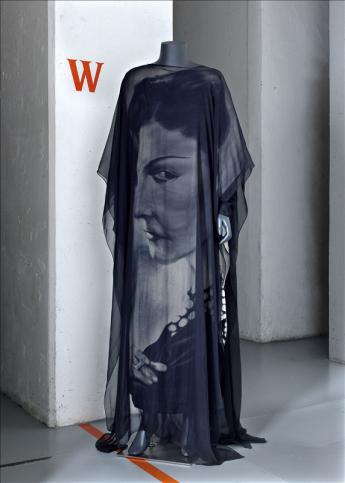