Cycling was all the rage among the French upper classes in the 1880s and, especially, the 1890s. For the bourgeoisie this new leisure activity required appropriate dress which had to be invented: since there was no tradition to abide by, people opted above all for comfort and practicality, with an emphasis on durability, as in this case, or on the softness of fabrics like jersey.

Male cyclists wore baggy trousers, while the most daring women wore the kind of bloomers illustrated here. Initially this was seen as scandalous, not to say frankly indecent: since the 14th century the two sexes were expected to wear distinctively different clothing.

Inspired by the bloomers invented by an American feminist in the 1850s, these shorts represented a major breakthrough in the history of dress: as the following century advanced, trousers, hitherto strictly for men, gradually became part of the female wardrobe. As so often happens, innovation began on fashion's fringes – sportswear in this case – before finding its place in everyday life. Many images from the period, especially cartoons, attest to the success of these garments, but surviving examples are relatively rare. 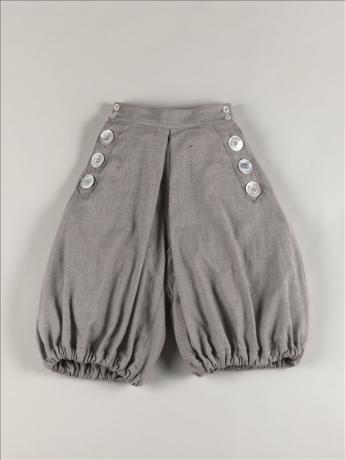