The color white was fashionable in the 1960s, which, influenced by the couturier Courrèges, evoked the taste for an ambient futurism. This trend also touched the classic couturiers, among them Hubert Givenchy (born in 1927), who opened his couture house in 1962.

That same year found the young designer in his atelier awaiting the arrival of a certain Miss Hepburn, a film actress. As luck would have it, however, instead of superstar Katharine, he found himself welcoming the young Audrey. Let down, he declined the offer to design the costumes for her next film, Sabrina, to be directed by Billy Wilder (1954), but his guest insisted and out of this initial disappointment sprang a lasting friendship and a deep mutual understanding.

This ensemble was worn by the actress, notably on the 20th of June, 1966, at the Longchamp Hippodrome. It is composed of a dress in wool serge, with the top in China crepe, and a short jacket, closed at the back. We are reminded of the spotlessly white-garbed Audrey Hepburn in William Wyler's How to Steal a Million (1966).Givenchy, then, was very much in tune with the times when he made this knee-length ensemble with its short sleeves, square shoulders and a precision of cut that harks back to his meeting of minds with his friend and master Cristóbal Balenciaga. 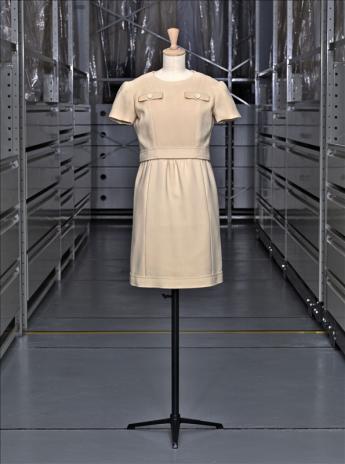