The fashion house opened by Jacques Fath (1912–1954) in 1937 did not really take off until the 1940s, offering a light-hearted, joyous range that was full of fantasy and deliberately expressive of its owner's personality. Aware that the media were crucial to his brand image, Fath had no qualms about being photographed in fancy dress or stepping out of his bath.

In the wake of Dior's 1947 New Look, Fath opted for asymmetry, the shaping of an idealised female body and a lengthening of the silhouette for both day and evening wear. Dating from the autumn-winter collection of 1948–1949, this day dress shows the couturier gleefully using trompe l'oeil to simulate a two-piece outfit: a sham-buttoning sweater and corselet skirt. The success of this model earned it appearances in both Vogue France and Elle in October 1948. 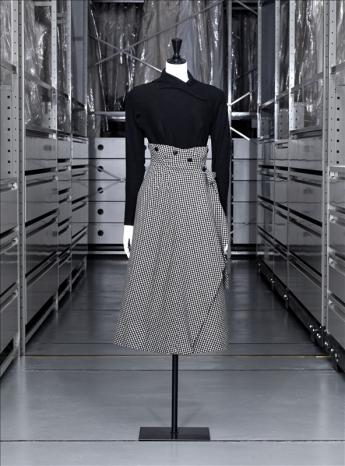