When Charles Frederick Worth (1825-1895) and his Swedish associate Otto Bobergh founded their couture house in 1858, Worth brought in a new sales system inspired by the dry goods stores (« magasins de nouveautés »), the fashion shops in which he received his start: special orders aside, the customer made her choice from among models proposed by the couturier; these models were then adapted to the client's measurements and tastes. Thus haute couture was born, although the term only came into use in the 1880s.

Success came quickly for Worth, notably thanks to the support of the extravagant Princess Metternich and, crucially, of Empress Eugénie, whose own tastes were more restrained. There are, however, very few examples of Worth's early work in museums. The one shown here is the oldest labelled Worth item in the Galliera collection; it can be dated to around 1869 for reasons that are both stylistic – the pouf-polonaise (a raised overskirt) – and factual: it bears the 'Worth & Bobergh' used from 1867 to 1870. The pair parted company in late 1870 and 'Worth' was subsequently the only name used. 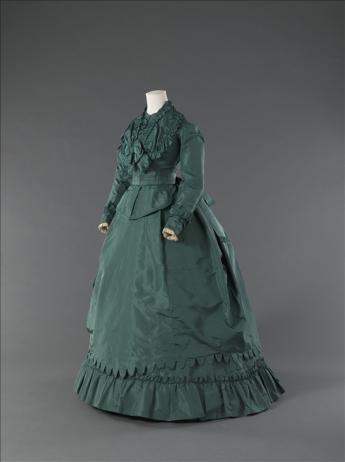