'The Days of the Week' headed notepaper for the Maison Poiret

Impressed by the 1908 album Paul Poiret's Dresses As Seen by Paul Iribe, Raoul Dufy decided he would like to work with Poiret and approached him with ideas for illustrations in 1909. Ever on the lookout for new ideas and keen to create his own printed fabrics, in 1911 Poiret put him in charge of the factory he had opened, so that Dufy could print his own prototypes. At the same time the pair began working with the Lyon silkmaker Bianchini, the idea being to produce their handmade fabrics in lengths suitable for making clothes. Dufy later joined Bianchini's team as artist-designer. 'Dufy', Poiret recounts in his memoirs, 'drew and sculpted for me woodblocks based on his Bestiary.'

In 1920 Dufy began working as a fashion illustrator and in February produced eight drawings for the first issue of the Gazette du Bon Ton, some of them showing his own textile designs for Bianchini-Férier & Co. In the same year Poiret asked him to illustrate his summer collection, the outcome being a seaside panorama that appeared in the May issue of the Gazette du Bon Ton.

The 'Days of the Week' headed notepaper was a further example of the empathy between the artist and the couturier, with Dufy portraying the couture house's activities and Poiret's elegant Parisian clients. 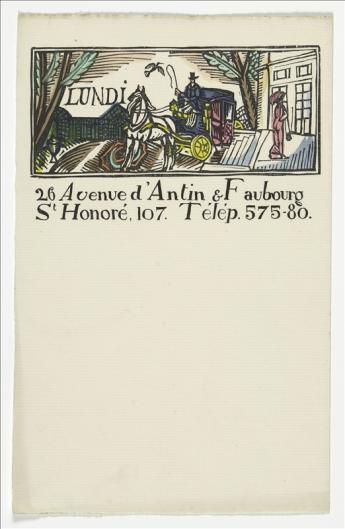