The Palais Galliera preserves almost 220 sandstone models between 1934 and 1988. This collection, so rich in pleated and draped evening gowns in jersey, often white, consists mainly of less well-known but equally virtuoso daytime models.

This is evidenced by the many day dresses with clean lines and discreetly cut sophistication, of which the museum retains no less than the original prototypes.

This afternoon gown, in black coated jersey, has a leather look. It stands out as a prototype thanks to the presence of a handwritten workshop bolduc revealing its workshop number "11276", the name of the workshop first in charge of its making "Atelier Jeannine" and the name of the cabin mannequin on whose body it was made: "Axelle".

The latter, Axelle Doué, presented her first fashion show for Grès in order to finance her studies. She gives the memories of this experience of "posing" during the performance "Models never Talk", by Olivier Saillard, presented in New York and Paris in 2014: "Too big, too round, too much buttocks. This is what Madame Grès said when I went to her home for a fitting. But she added, I'm going to try it on anyway. The dress she built on me is faithful to the drapes that made her famous. In jersey, white and chocolate from Racine. The neckline is a deep V from the waist down. The shoulders are bare. The front is draped with a series of pleats held together up to the waist. The waist is adorned with a long cord of jersey called rat tail which is delicately tied at the front. A cape back gives majesty to the look. Madame Grès determines the length of the dress herself. On her knees, she cuts the hem which covers the pump and which breaks delicately on the ground. The width of the fabric was such that it forced me to nervously push the bottom of the dress off the foot. This imposed a singular gait on me. This approach was to accompany me throughout my career".

This daytime dress is part of the same collection as the evening model. She cites its shape, with a loose blouson back that Madame Grès was fond of during the 1980s. 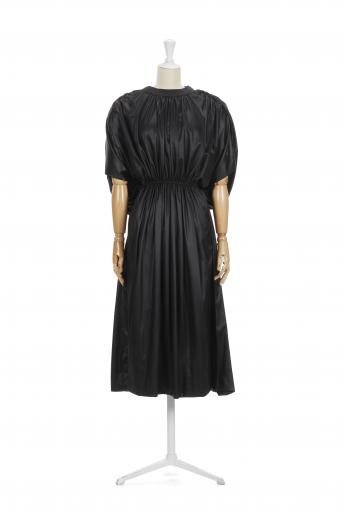