Even as a child, Jacques Griffe (1909–1996) was fascinated by the work of Madeleine Vionnet. He collaborated with her from 1935 to 1939, but it was only in 1948 that the two became close friends. He also went on to become the successor of the couturier Molyneux.

Griffe worked like Vionnet, using a miniature wooden dummy she had given him: this allowed him to test, twist and drape a fabric at will.

In addition to his virtuoso cutting, he was famous for his touch with colour and his ability to marry seemingly incompatible nuances. This dinner dress is a fine illustration of an alliance between colour and cut, skilfully harmonising four colours of velvet and the curves of a hemmed neckline that opens like the pages of a book. 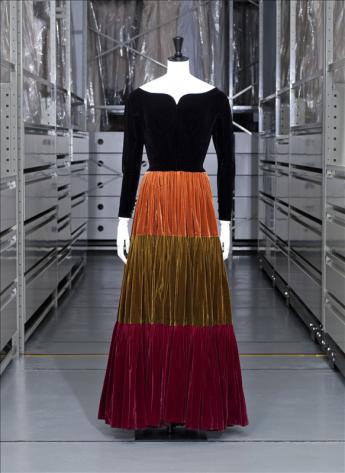