In 1957 Jacques Heim, then president of the Chambre Syndicale de la Couture, founded the creative ready-to-wear group that included Grès,  Lanvin, Jacques Griffe, Nina Ricci and Carven. His urge to extend the couturier's work to luxury off-the-rack lines went back to 1934, when he and Lucien Lelong made a trip to New York together. Two years later he launched the 'Heim Jeunes Filles' line, aimed at his clients' daughters and less expensive than his haute couture collections.

'Jacques Heim Actualité' was one of his luxury ready-to-wear lines.

Heim's work is characterised by the classicism and strict sense of proportion evident in these five drawings for his 1959–1960 winter collection, which are an eloquent expression of the general direction fashion was taking. In their formal simplification the silhouettes herald the trend of the 1960s, at the same time as they betray the influence of the collections designed for Dior by Yves Saint Laurent.

The clothes come complete with accessories, the hairstyles are the latest and the poses are typical of the models to be seen on the catwalks and in the magazines of the time. These drawings, then, offer a very accurate picture of the dominant fashion currents on the threshold of the 1960s. 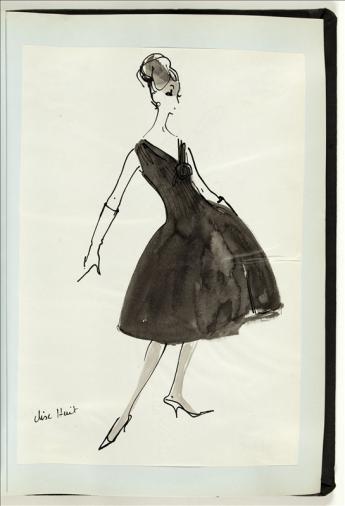