In spring-summer 2004, Alexander McQueen signed one of his most striking collections. Presented in the Wagram Hall and entitled "Déliverance", the fashion show was transformed into a performance and the models into competition dancers. Inspired by Sydney Pollack's 1969 film "On achève bien les chevaux" (We Finish the Horses), they all dance until one of the participants is exhausted and dies. The 1930s, the historical setting of the film, and its long, close-fitting fashion, predominates on this sheath dress, with diamond inlays of chiffon on the bias, dragonfly decorations and twisted straps. This piece, true to the spirit of the collection, celebrates McQueen's talent, particularly in the art of blurring. This is evidenced by the floating chiffon flounces, only cut out of diamonds with clean-cut edges. 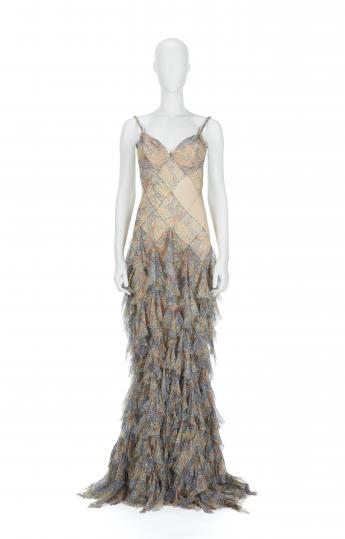