Cristóbal Balenciaga (1895–1972) opened his couture house in Paris in 1937 and with his first collection revealed a style inspired by his Spanish roots. Definitive fame came with his parade of infanta dresses in 1939. A year later France was occupied and if the couture houses lost their magnificence, they never abandoned their creativity. The owner of a personal collection of ethnic and historic garments – part of which is now in the Palais Galliera – Balenciaga drew his inspiration from a past reinterpreted in ensembles that were either colourful or more austere.

This dress from the 1940–1941 autumn-winter collection reflects his creative method. Fully buttoned down the front, it looks more like a monk's robe than a Parisienne's black dress. However, a detachable pouf tied at the waist turns this sombre vision into an allusion to the bustle fashion of the 1870s. 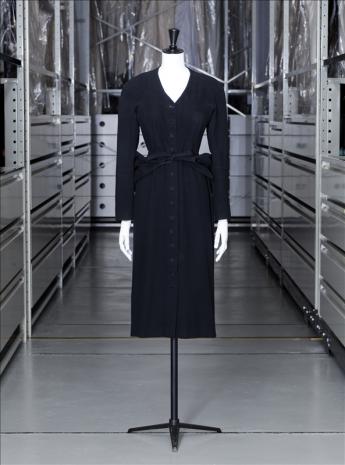