Dress coat bearing the livery of the King of France

With its narrow basques and small upright collar, this coat is set apart from fashionable garments by its colours – dark blue lined with red – and its juxtaposed braid. This was a formal garment probably worn by a servant belonging to the royal household. Servants' dress was coded by colour and ornamentation. The wearing of livery was restricted to those of inferior rank and designated by the term 'the king's livery'. The king's livery was of blue woollen fabric with crimson and white braid, while the queen's was red with blue and white braid. The design of the king's livery braids changed under Louis XIV, when white cord was used to form ovals on red velvet ribbon. For formal livery coats like this one, two such braids were separated by a third, of inverted triangles. Travellers' accounts mention thousands of liveried servants at court; at royal entries and other ceremonies their numbers and splendid appearance enhanced even more the renown of the French monarchy. 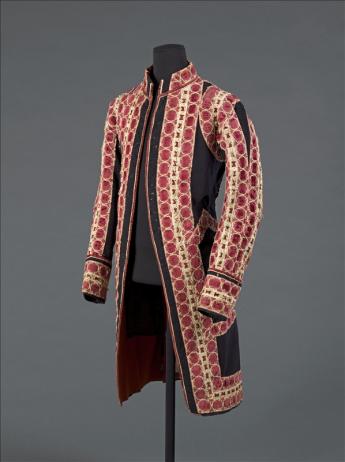