Like Fortuny, Issey Miyake is immediately associated with pleats. In both cases, though, the idea fails to do justice to their talent and their experimental work. Issey Miyake joined Créateurs & Industriels in 1972 at the invitation of founder, Didier Grumbach, and like the other designers in the group, his work reached far beyond the boundaries of fashion. He bases his work on a personal approach to Japanese and European conventions as they apply to the body and clothing; he is often described as a sculptor, a judgement largely justified by the exhibitions of his work which he organises and the ballet costumes he designs.

Even so, it would be frustrating, in a fashion museum, not to present an example of his pleating. This dress from 1994 illustrates the evolution of his exploration of pleats in the second half of the 1980s: the synthetic fabric used retains the memory of the pleats and allows a host of different possibilities in terms of volume and movement. The dress wittily adapts the Chinese lantern tissue paper technique, combining it with colours suggestive of fun and celebration. This garment-sculpture has a variable-geometry life of its own: folded in on itself like a lantern, it can be stored in the bag it was sold in, packaging being another of its creator's concerns. 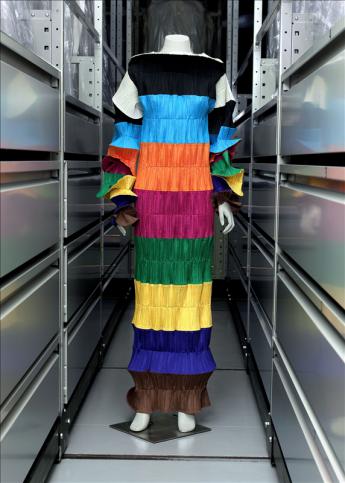