British designer John Galliano owes his fame in part to the extreme sophistication he has brought to his ready-to-wear models.

For spring-summer 1995, John Galliano is presenting a resounding collection amidst old collectibles. His models are inspired by the silhouette of the 1950s, with a marked waist and rounded hips.

Among them, this short dress is reminiscent of the cocktail dresses after 1947 designed by Christian Dior, Pierre Balmain or Jacques Fath. The black woollen fabric, previously only used for daytime models, was extended to evening dresses from the 1940s onwards. The controlled asymmetry of the décolleté and the heavy side drape are details that abound in fashion between 1947 and 1955. The cut of the sleeves, very greedy in fabric, is also emblematic of this decade, compensating for the textile rationing imposed during the Second World War.

With hindsight, this collection heralds the appointment of John Galliano in 1996 as artistic director of the Christian Dior fashion house. 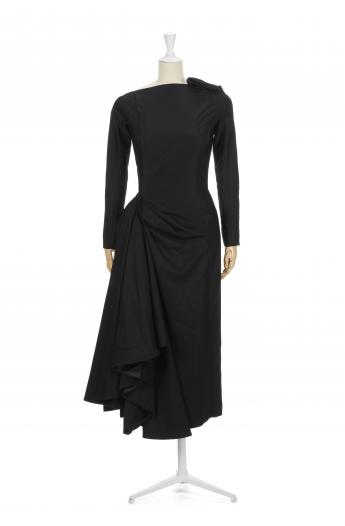