After working as Jean Paul Gaultier's assistant, then as knitwear stylist for Thierry Mugler, in 1997 Nicolas Ghesquière joined Balenciaga as artistic director of the Balenciaga le Dix collections. Very quickly, the originality of his talent was recognized, and the House of Balenciaga recovered the prestige and influence that it had while Cristóbal Balenciaga was still alive.

Without ever copying the master, Ghesquière shared his grasp of cutting and volume, together with a modernist vision of fashion. Ever-meticulous, he effected skilled weddings of unlikely materials – wools, silks and sports textiles – played with asymmetry, and drew on science fiction movies for new silhouettes and styles. This has made him one of the most influential and imitated artistic directors of the early 21st century: his subtle, finely honed fitting has even left its mark on mass marketing. His spring/summer collection 2008 was one of the most striking of all and has become a landmark in fashion history. His silhouettes are as immediately recognisable as those of Dior's 'Bar' suit of 1947 and Saint Laurent's 1967 tuxedo. A special example of his daring is his association of the printed silks used by Cristóbal Balenciaga in the early 1960s and the neoprene used for wetsuits. Bonded to each side of a sheet of neoprene, the silk that is such a part of the house's history keeps its shape as never before, echoing the technical qualities of the gazar commissioned from Abraham by Cristóbal Balenciaga. For both Balenciaga and Ghesquière – representing two eras and two different sensibilities – any garment always has a geometry and an existence independent of the body. 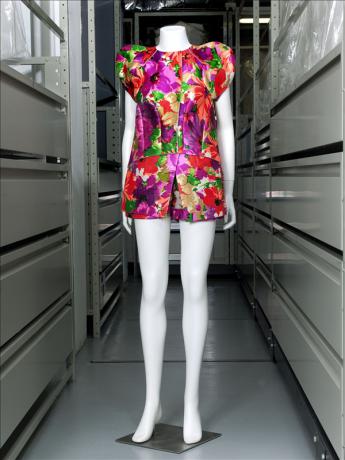