Hedi Slimane was born in Paris in 1968. Passionate about photography, he studied art history at Michelet and then at the Ecole du Louvre. In 1996, he directed the ready-to-wear collections of the Yves Saint Laurent fashion house. In 2000, Dior offered him the position of artistic director of the men's collections. He then imposed a new slim, slender silhouette, with a reduced stature, symbolised by narrow jeans called "skinny", which would soon be taken up by the street in large numbers.

In 2012, Pierre Bergé once again invited him to join Yves Saint Laurent as artistic director. The studio is relocated to Los Angeles and the label is renamed "Saint Laurent Paris". The first collections divide the critics. However, after several collections, the influence of Hedi Slimane's style is palpable.

In 2018, Hedi Slimane replaced Phoebe Philo as artistic director of the house of Céline and imposed his own style in line with his proposals for Saint Laurent.

The masculine silhouette joins the one imagined for Dior between 2000 and 2007. Still inspired by the rock aesthetics of black jackets and the British "mods" style, this passage is distinguished by the narrow trousers reminiscent of skinny jeans.

Right from the start, Hedi Slimane proposed a new canon of masculine beauty. Far from the tanned and muscular models of the 1990s, he astonished by his choice of tall, emaciated teenagers, spotted in the street, who can still be found at Céline's 20 years later.

This silhouette bears witness to the influence, continuity and intransigence of the style imposed by Hedi Slimane. 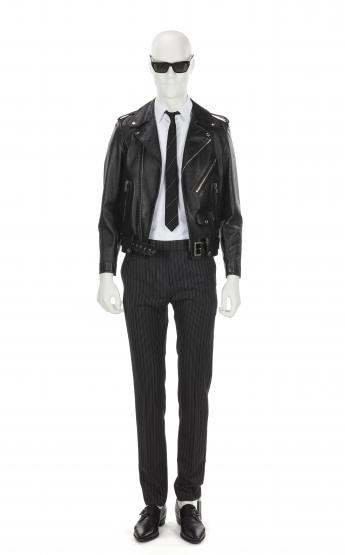