"ALIX" TOP AND "TUNGSTEN" SKIRT ; REPRODUCTION OF A SILHOUETTE COMPOSED BY RICK OWENS FOR THE RETROSPECTIVE "RICK OWENS SUBHUMAN INHUMAN SUPERHUMAN" PRESENTED AT THE TRIENNIAL OF MILAN (15 DEC. 2017 - 25 MARCH 2018).

From December 15, 2017 to March 25, 2018, Rick Owens presented one of his first monographic retrospectives as part of the Milan Triennial. "Rick Owens Subhuman Inhuman Superhuman" at the Palazzo de la Triennale exhibited about a hundred silhouettes from 1994 to the present day. The exhibition opened with a first group of silhouettes in draped viscose jersey. Some of these sets have been reconstructed from pieces from different parades assembled into new silhouettes.

At the request of the Palais Galliera, Rick Owens agreed to redesign and offer the first silhouette of the exhibition. The shape of the draped clamshell top was designed for the spring-summer 2011 season, that of the skirt in 2006. The top model is called "Alix" in homage to the exhibition "Madame Grès, couture at work", organized in 2010 by the Palais Galliera at the Musée Bourdelle. This model testifies to the work of the viscose jersey drape emblematic of Rick Owens' creations from the 2000s.

The structures of Rick Owens' clothes are surprisingly brutal, emanating a primitive grace. The designer explains: "I like the cuts and shapes to be graceful, but also barbaric and coarse as much as possible". 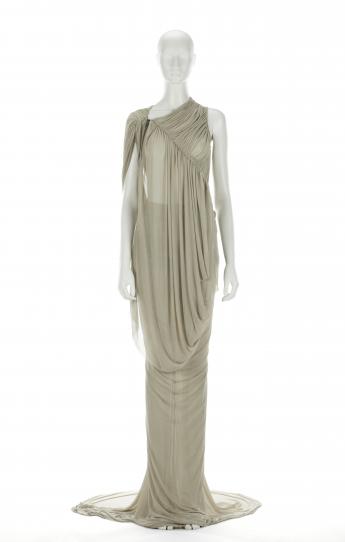