SHIRT, SKIRT AND PAIR OF SHORTS

Glenn Martens, born in Bruges, is a graduate of the Antwerp Academy of Fine Arts. After working with Jean-Paul Gaultier and Bruno Pieters, he became assistant to Yohan Serfaty, founder of Y/Project. After the latter's death in 2013, he took over the artistic direction of this company and metamorphosed its image, creation and sales results. In June 2017, Y/Project won the Grand Prix de l'ANDAM to help develop the brand.

This silhouette of the fall-winter 2018-19 ready-to-wear collection challenges the structure of the garment, one of the main characteristics of the Belgian school of which Glenn Martens is the heir. The shoulders of the oversized polo shirt are pinched and then folded down at the front. From its long buttonhole, only the button on the throat is closed, forcing the garment to be worn differently.

The influence of the history of the costume can be seen in the wide, thick felt wrap skirt, whose structure held by a button recalls the skirts of Amazons at the end of the 19th and beginning of the 20th century. The stream of lining that spews out from its opening is reminiscent of the representations of rolled-up skirts present in 17th century Flemish painting, while evoking the work of Martin Margiela who, between 1988 and 2008, never ceased to reveal the inside of the garment.

Finally, the silhouette ends with long thigh boots made in collaboration with the Australian brand UGG, known for its soft and comfortable eco-friendly sheepskin boots. Far from the popular examples that were abundantly worn in the 2000s and 2010, these 1.54 metre high shorts feature high heels and generously draped over the leg. This unexpected collaboration between an avant-garde label and a popular brand is conceived by Glenn Martens as "Iconic, eclectic, versatile. But above all fun," like his advertising campaign depicting models photographed as masterpieces of art history, including The Birth of Venus de Cabanel (1863), only booted in these waders. 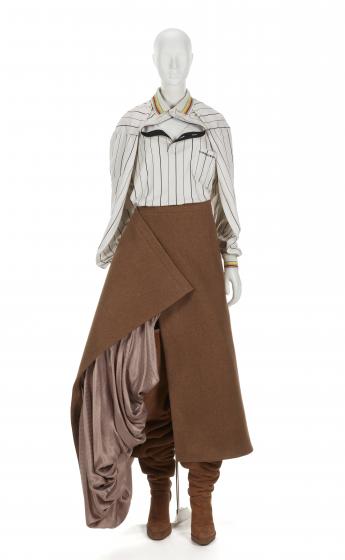