Yohji Yamamoto (1943-Aug.) concludes his autumn winter 2019-20 parade with five slowly advancing female silhouettes. All dressed in black, their heads are covered with a large black veil. They freeze before the one in the centre unveils herself with a big smile and red lips.

The discomfort that runs through the room is palpable as many journalists bring these clothes closer to the niqab. This parallel is quickly denied by the designer. Indeed, it is from popular Spain that Yohji Yamamoto drew his inspiration.

The outfit is based on the archetypal clothes worn by the veiled women of Vejer in the Cadiz region between the end of the 19th century and the beginning of the 20th: a black skirt, gathered and tied at the waist, a petticoat entirely covered by the skirt and, finally, a black mantis, also gathered and tied at the waist, which they covered by raising it over their heads, leaving only one eye exposed. 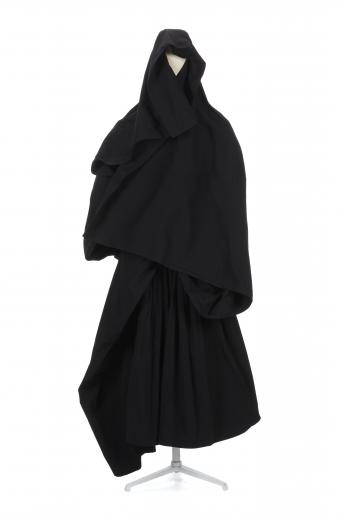