Born Jean Demètre in Alexandria, Jean Dessès (1904–1970) was of Greek nationality. After studying law he soon turned to fashion and opened his fashion house in Paris in 1937. After World War Two he began sculpting generously pleated draped muslin evening gowns whose colours varied from plain to subtly contrasting gradations. Apart from his masterly use of draping, there is no particular reference to antiquity in his creations, as indicated by this model acclaimed by Vogue France in September 1956. Far from borrowing the living forms of Greek caryatids, marked by their bio morphism, Dessès used pleated muslin for chrysalis-style gowns. 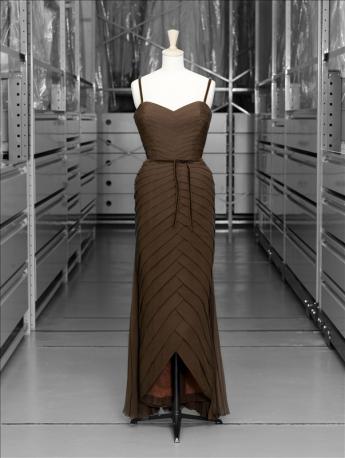