Daughter of American railroad magnate Jay Gould, Anna Gould (1875–1961) married Boni de Castellane in March 1895. The couple divorced in November 1906 and in July 1908 Anna Gould married Hélie de Talleyrand-Périgord, Prince de Sagan, in a civil ceremony. Part of her extensive wardrobe is now in the Palais Galliera collection. From the beginning of the century until the First World War she bought her clothes mainly from Redfern; then from Agnès or Jérôme in the 1920s; and from Chanel in the 1930s. Gleaming with pearls and embroidery sometimes arranged in trompe l'oeil, and embellished with flounces and beaded fringes that highlighted the wearer's movements, this dance dress is emblematic of the 1920s, when its pink colour was very much in fashion. 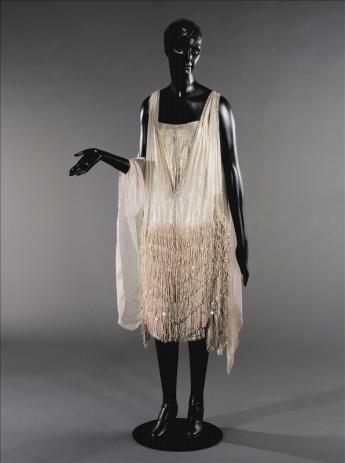