Founded by Gaby Aghion and Jacques Lenoir in 1953, the Chloé fashion house played a decisive part in the move towards innovative, luxurious ready-to-wear. For Gaby Aghion, quality, whether technical or creative, came before all else, with Chloé intended as a bridge between ready-to-wear and haute couture. The house's history is that of those new fashion figures, the designers who emerged in the late 1950s and were ready to adapt their talents to the house they were working for.

And all the top names worked for Chloé: Gérard Pipard, Christiane Bailly, Michelle Rosier, Tan Giudicelli and Guy Paulin, to name only a few. In 1966 Karl Lagerfeld was appointed artistic director, a post he held until 1988, and the success of his collections had made him famous before he moved on to Chanel. His personal tastes showed through clearly in printed fabrics inspired by artists and architects of the first third of the 20th century, like Oskar Schlemmer, Aubrey Beardsley and Peter Behrens. The embroidered, spangled light bulb on the midnight blue satin of the dress is the logo of the German company AEG, designed by Behrens in 1907.

The sleeves with their spangled edging also suggest the shape of a light bulb, in an ironic assertion that with this dress you can really shine in the top clubs. This particular model was enormously successful in Paris celebrity circles because it had been seen on Andrée Putman – among others – at parties at the Palace. 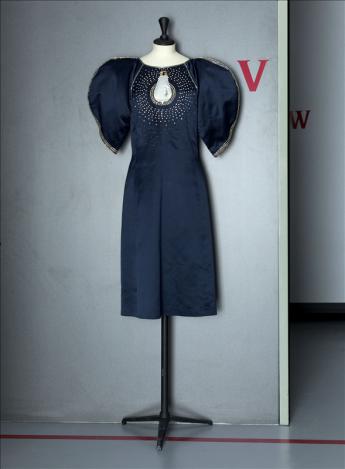