The Palais Galliera possesses a remarkable group of figurines once belonging to the couturière Alexandre Ghys, who donated them to the Musée Carnavalet when she retired in 1879. The work of Charles Pilatte, then of Etienne Leduc after 1870, these drawings of day and evening dresses, cloaks, etc., offer a comprehensive overview of the changes in fashion between 1858 and 1878. With Emile Mille, Léon Sault and others Pilatte was one of the originators of these figurines, which in the mid-19th century were much sought after by luxury fashion houses keen to publicise their wares via lithographs. Described as 'portrayers of costumes and dresses' in the Didot-Bottin from 1860 onwards, these illustrators turned out a host of stereotyped gouache drawings that boosted the production and circulation of the models.

One indication of massive output is that in the case of Madame Ghys's figurines, the silhouette, face and hands were hand-drawn until the early 1870s, but were then lithographed to save time and make them more uniform. These equivalents of the models of 20th-century collections could then be sent out to clients or given to fashion magazine illustrators for more artistic reproduction of the house's creations. In one example, an engraving after Compte-Calix of the ball gown drawn here by Charles Pilatte (GALKD3501) was published in Les Modes Parisiennes in 1862 with the caption 'Dresses by Madame Alexandre Ghys'. 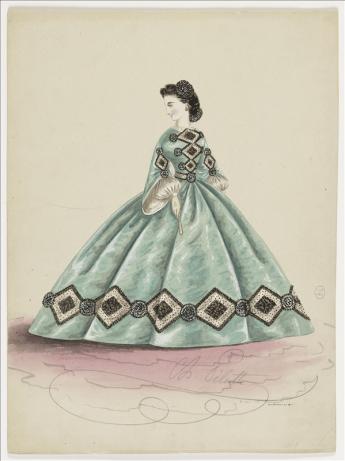