In January 1997, Thierry Mugler presented his first haute couture collection for spring-summer by signing one of his most famous fashion shows, entitled "Les Insectes".

"Insects have always fascinated me for what they are and not only for their appearance - reveals Thierry Mugler. The woman/insect is both a fragile being and an armed predator - frightening and impressive at the same time"

Inspired by Franz Kafka's novel "Metamorphosis" (1915), David Cronenberg's film "The Fly" (1986) and the documentary "Microcosmos", released the previous year, Thierry Mugler calls upon all forms of entomology to deliver this zoomorphic collection, from "ant" suits to "chrysalis", "cocoon" or "chafer" capes.

These "fly" glasses are the emblems of the fashion show. A technical tour de force, they are made of a single piece of moulded and brushed Plexiglas, dark blue. 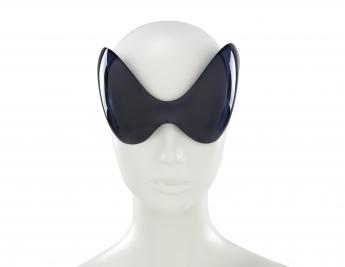