Folding fan, 'The Rape of the Sabines'

Leaf decoration recto: The Rape of the Sabines: Roman soldiers carrying off the Sabine women in a setting of ancient buildings.

Leaf decoration verso: ancient ruins and floral ornamentation. Decoration of the central cartouche on the head: tender scene before the temple of love.

The leaf of this beautifully made fan is embellished with a reverse copy of the famous painting by Pietro da Cortona (1596–1669), The Rape of the Sabines, executed in 1627–1629. Commissioned by the wealthy banking family Sacchetti, the painting is currently in the Pinacoteca Capitolina in Rome. This work was frequently copied on what were called 'Grand Tour' fans: in the 18th and 19th centuries young aristocrats, especially from England and Germany, rounded off their education by touring Europe, and notably Italy.  In the course of their travels they visited ancient sites and acquired works of art; fans like these were among the souvenirs they brought home with them. 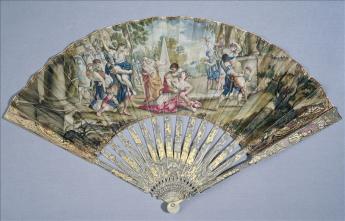