An associate of Malcolm McLaren at the time, Vivienne Westwood presented her first fashion shows under her own name in 1982; already the pair had been creating collections together for eleven years, taking inspiration from fetishism, pornography, Punk and the 'Pirate' trend of the early 1980s. Their association was terminated in 1984.

Westwood came to fashion through rock music, transgression and provocation. Never absent from her creative process, they did not prevent her from acquiring a far-reaching, finely honed taste for costume and its history. Her historically-oriented collections are full of references to 18th-century courtesans and the cocottes of the following century and Belle Epoque Paris. She even wittily brought back the late-19th century bustle in 1994.

With an exemplary economy of means, this 'Fragonard' evening gown conjures up the gallant 18th century which Westwood is enamored by. Its simplicity of shape counteracts its mass of taffeta printed with red chalk cupids. On the upper torso the pattern is highlighted with hand-painted touches of acrylic. The virtues of the fabric and the fullness of the garment have allowed the designer to include all the ruffled and draped effects that so inspired her in 18th-century English and French painting. There is no geometry governing this evening gown, which asks only to match the caprices of the wearer. It can also be seen as a sumptuous negligee worthy of Madame Pompadour or as the disarray of a curtain revealing an amorous scene by Fragonard. 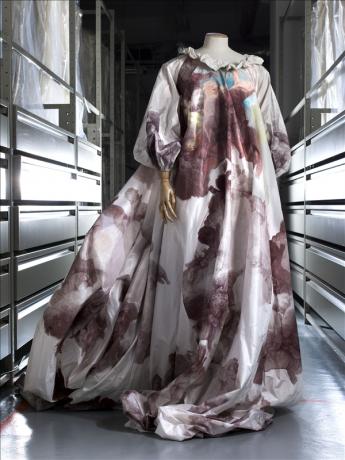