'Marcus is one of the few photographers who understands clothes and can express the couturier's ideas.' — Hussein Chalayan

Marcus Tomlinson has been working with London-based Cypriot designer Hussein Chalayan since 1999. In 2003 the Musée Galliera called on him for its Nuit Blanche (White Night) event: the result combined a film made with couturier Issey Miyake and projected onto the museum's facade, and an installation made up of three lenticular photos. The formally rigorous Frame series suggests the stages in the creation of a coat while making creative play with its medium. Marcus Tomlinson's poetic approach to fashion, together with aesthetic explorations on the cusp between still and moving images, make him one of today's most intriguing photographers. 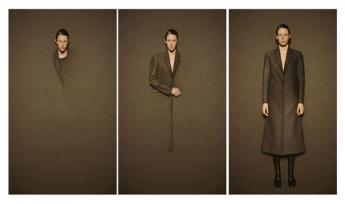