In France the 18th century saw the reign of bonnets, hoods and mantillas. Things changed in 1778 when the addition of a stiff brim turned the bonnet into a hat. Under Louis XV women's hats were restricted to the tricorne, worn when out hunting, and the shepherdess's hat, for walking in the garden. In England, by contrast, the hat was in fashion throughout the 18th century.

With its use of straw lace appliqué, this handsomely made sun-hat belongs to the 'walking headgear' often to be found in the portraits of Madame de Pompadour. 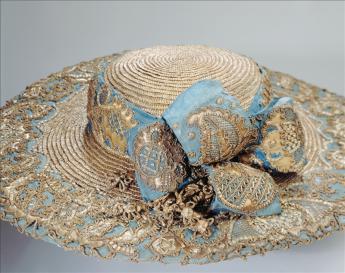