Vogue France's main photographer in the first half of the 1950s, Henry Clarke gave the magazine a classical style characterised by elegance and sophistication. He placed his cult models – among them Anne Saint Marie, Bettina, Dorian Leigh and Dovima – in very Parisian surroundings or against backdrops of paintings by the masters. The elaborate interiors and classical architecture of settings like the Opéra Garnier, the Hôtel Crillon, Maxim’s and the Lapérouse reinforced the notion of haute couture as an integral part of French culture.

In these photos, Dorian Leigh wears a dress by Jacques Heim, S/S 1955, on the backdrop: a painting by Courbet at the Petit Palais, Paris. Anne Saint Marie wears a marine wool jersey suit by Chanel, A/w 1955, Paris. 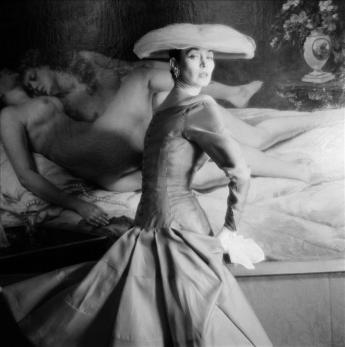