This suit is clear testimony to the spectacular change in male fashion between 1660 and 1670. The coat, then called a justaucorps, replaced the short doublet, unifying the male figure and highlighting its poise. Complemented by narrow breeches and a waistcoat of similar cut, it makes up the still current three-piece suit of our time.

The coat is conspicuous for its slightly flared shape and the two horizontal pockets set at the bottom of the basques. It is closed by 46 buttons. The slits at the armholes and the sturdiness of the fabrics and the reinforced seams suggest a utilitarian garment: one probably made for travelling and of excellent quality.

Kept in the same family for two hundred years and mentioned in a will in 1748, this coat was regarded as a relic of St François de Sales. The saint from Savoie, who died in 1622, could never have owned it, but the shape of the garment is contemporaneous with his dates of beatification and canonisation in 1661 and 1666. Perhaps linked to one of the many brotherhoods of St François de Sales founded in the late 17th century, this is the only example of male fashion from this period in France's public collections. 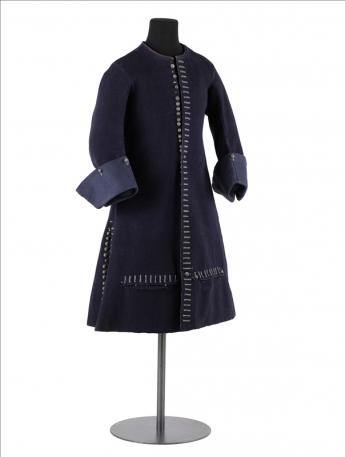