Probably reassembled, as was frequently the case, in the late 19th or early 20th centuries, this waistcoat is remarkable in that its front panels – worn, seemingly inexpensive and generously ornamented with vegetal patterns – make it one of the few examples of illegal 'Indian cotton' to have come down to us in France. The term 'Indian cotton' was used for all kinds of cotton or linen/cotton fabrics with applied decoration, whether painted and dyed or printed. Produced in India and exported by the French East India Company, these fabrics were soon being imitated in Europe, but the results were of relatively poor quality: in the late 17th and the first half of the 18th century the makers had still not discovered the Indian technique for fixing colours. In 1686, on the grounds that the French silk industry had to be protected, the government banned the making, use and wearing of 'Indian cotton', a regulation that remained in force until 1759. The ban, however, only increased the popularity of these imitation fabrics, which continued to circulate illegally throughout the country. Mostly of inferior quality, however, they have rarely survived. 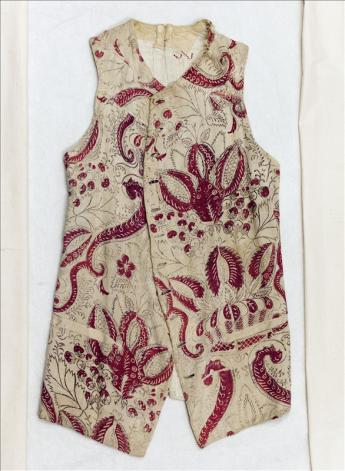