The order of the Holy Spirit was founded by King Henri III on 31 December 1578. The most important political and religious order of France's Ancien Régime, it is the French equivalent of the prestigious, more ancient orders of the Garter in Britain and the Golden Fleece in Britain.

The day of the Reception of Knights into the order was fixed by statute as 31 December. The king named the knights and robed them with the order's mantle and necklace.

The mantle met the stipulations of the order's statutes: 4.22 metres long and 2.96 metres wide, it comprised of six vertically assembled velvet gores and was embellished with 237 flames in ascending order of size. It was edged with eighteen H's, eighteen fleurs de lys and eleven battle trophies.

The flames were created with overlaid spangles, in the technique known in French as paillettes comptées. Half of each one is visible. This technique was described by Charles Germain de Saint-Aubin in 1770. This is the only known 18th-century example of the mantle of this order, and also the sole court costume of this period in France's public collections. 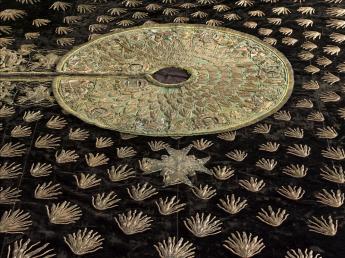