After two years in the fashion section of the La Cambre School of Visual Arts in Brussels, Olivier Theyskens left in 1997, at the age of twenty, to found his own label. His creative world is sophisticated, haute-couture inspired and often gothic in spirit. In 1998 Madonna commissioned dresses from him for music videos that made the young designer famous.

Theyskens was artistic director for Rochas from 2002 to 2006. The dress shown here was commissioned by Sofia Coppola to promote her film Marie Antoinette, released in 2006; intended as an evocation of the French queen by Olivier Theyskens, it is not part of a collection and does not appear in the film. At once spectacular, ghostly and poetic, it uses a range of light greys to suggest Marie-Antoinette's beloved white muslins overlaid with the dust of time. Thus Theyskens succeeds in conveying the end of the Ancien Régime and the legendary figure of the queen without resorting to slavish historical reconstruction. The dress itself is supported by an imposing crinoline of a type actually used only during the Second Empire, but this evocation is more powerful than any straight recreation. What Theyskens offers is a mingling of a court and an English-style dress with 'Polish' details, made of the same cotton as the tunics Marie-Antoinette wore in her hamlet at the Trianon.

The faux hair sewn onto the back of the bodice is a reminder of the queen's tragic end. With this dress – worn for Vogue US by Kirsten Dunst, who played the title role – Theyskens has created a tribute to a ghost, using a silhouette to conjure up different moments in her life. The Vogue article by Grace Coddington showed Johansson among the ivy in the Trianon hamlet, and when the Sofia Coppola film was released in the United States, the dress featured in a window display in Barney's, the high-end fashion store on Madison Avenue. 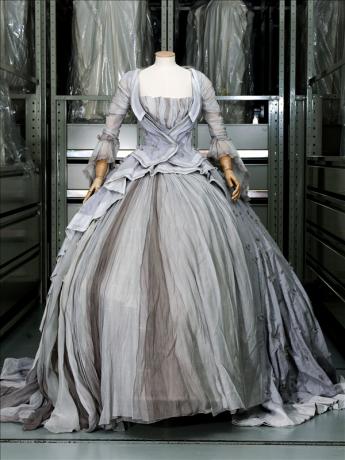