In the 1950s L’Officiel de la couture et de la mode de Paris published a supplement, “Les cahiers bleus”, or “The blue notebooks” devoted to the fabrics being used in haute couture. In the supplement's fifth issue of 1952, 'Palmyre' by Christian Dior (1905–1957) was described as 'a sumptuous evening dress in fabric by Robert Perrier'. A sample of 'sugared almond blue' fabric accompanied front and back view drawings of the dress.

Various apt shades of blue – 'cerulean', 'smoke' and 'ice' – were used for the stylized floral and other motifs embroidered with pearls, sequins, and crystal. The dress's bustier, accentuated by serried ranks of palmettos, adds to the majesty of a model worn and donated by the Duchess of Windsor.

'Palmyre' is one of the Palais Galliera collection's most precious items. A concentrate of Dior's stylistic ambitions, it highlights his taste for the classical, represented here by 18th-century foliage patterns and for the restrained charm of the basque concept that was a 1950s archetype. 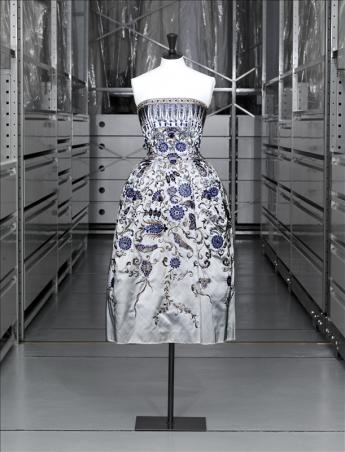