In his memoirs Paul Poiret mentions his meeting with Paul Iribe, founder of the magazine Le Témoin, from whom he commissioned an album portraying his principal creations. Inspired by the Directoire line and presented to Poiret's clientele in a layout influenced by Japanese prints, the straight, high-waisted dresses were the focus of a luxury album marked by the couturier's keen sense of advertising. It was published in October 1908, when Poiret was still at 37 Rue Pasquier. The album contained no text: simply 10 tipped-in plates of different sizes.

'A copy was sent to each European sovereign, bearing, after the flyleaf, a personal, handsomely printed dedication. All of them were well received and much appreciated, with the sole exception of the one sent to Her Majesty the Queen of England, which was returned to me with a letter from a lady in waiting, asking me to refrain in the future from any communication of this kind. I never understood why they took it badly.' (Paul Poiret, En habillant l’époque, Paris, Grasset, 1986, p. 69)

The Palais Galliera's copy of the album is dedicated by Poiret 'To Madame Ruhmann, Parisienne, with respect and admiration.' Might this be a misspelling of the name of the wife of interior designer Emile-Jacques Rulhmann? We cannot be sure, but whatever the case, the dedicatee was a member of the small circle of the Paris elite. 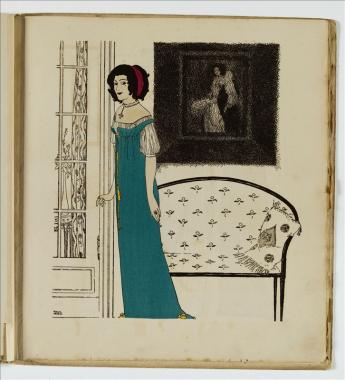