This cloak was a semi-circle 2.9 metres in diameter. Its semicircular cut is reminiscent of that of the Roman toga, but the cloak was draped over the left, rather than the right arm and pinned in place on the right shoulder, rather like the chlamys worn by the Greeks. It was embellished with blue wool appliqués of palm leaves and tridents.
Like other cloaks, this one was commissioned by the state in 1798. The fabrics were provided by factories in Sedan and the garments were cut in Paris and embroidered in Lyon. The cloak was worn over a knee-length coat and close-fitting breeches, the outfit being rounded off with a blue velvet toque bearing a tricolour plume. This first uniform for representatives of the people in government institutions was decided on by the Convention in 1795: after much debate it was decided to combine modern dress with an antique-style cloak, the result being close to the design proposed by painter Jacques-Louis David (1748-1825) in 1794. The costume was worn officially for the first time on 19 February 1798, by members of the Directory Councils. Thus the garment seen here is both a unique civil uniform and invaluable testimony to an episode in French political life. 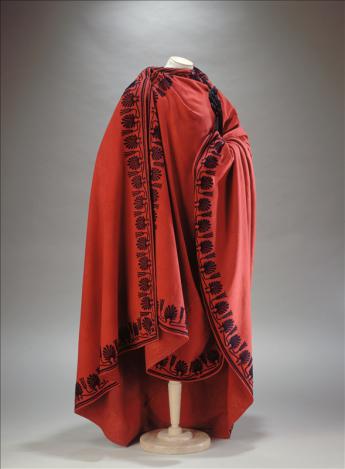