Photo of the house Fred's model

From a Paris fashion houses album

This photo is an excerpt from an album which presents 85 garment designs photographed in Paris fashion houses on store window dummies, or worn by live models, saleswomen, or couturières. In some of the images we see the black satin sheath the model is wearing under the dress. The 27 houses represented include such great names as Redfern, Raudnitz, Druilhe, Fred, Beer and Félix. Nothing is known of the background to this album: was it assembled for a client wanting to order that season's garments? Or for a buyer in search of new designs to choose from? The poses, like the images, are documentary: done quickly, with no concerns for aesthetics. This gives the images a certain modernity and originality. The photographer is not named, but in one of the images we glimpse a woman's reflection in a mirror. 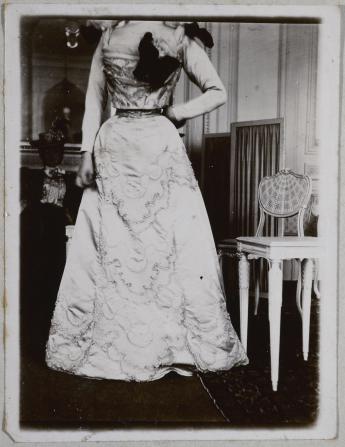