Born in 1959 in Kent, England, David Downton is recognized as one of the most important current fashion illustrators. After studying at Wolverhampton Art College, he began a career as a general illustrator, working for advertising, cookbooks, children’s books and supplements of the major British newspapers, such as the Financial Times, which in 1996 ordered a series of illustrations from him for Paris Fashion Week. For the artist, this was decisive, and he decided to begin a career dedicated to fashion and the portraits that were inseparable from it.

David Downton was influenced by designers like Gruau, Eric and Antonio, as well as by Bob Peak, whose work inspired the aesthetics of the American Mad Men series. He was venerated by Downton for creating the poster for My Fair Lady by Cukor in 1964. In principle, David Downton’s style feeding on references and a certain nostalgia could be considered baroque. However, in particular in his portraits, he pushes the search for the perfect line or a detail that summarizes a look or a silhouette to the point of an India ink wash that Chinese or Japanese calligraphers could claim as their own. He collaborated on the foreign editions of Vogue,  Harper's Bazaar,Vanity Fair,The Times, and The New York Times and filled orders from houses like Dior, Chanel and Valentino. His talent as a portraitist led to his being offered a year-long residence at the Claridge in London to make the portraits of the illustrious clients (and styles) found there.

The portrait he made in 1999 of the famous fashion writer Anna Piaggi (1931-2012) dates from the beginning of his career as a portraitist. Although all the portraits by David Downton can be considered as fashion illustration, the one of Anna Piaggi is a sort of manifesto. The writer’s talent was not limited to journalism. Each of her appearances (as carefully planned and anticipated by her audience as the doppie pagine that she created for Vogue Italy) was a compendium of humor and creativity based on fashion history – and more broadly on taste – and made her a living work of art and an icon unto herself. The pink background she stands out from evokes both the shocking pink of Schiaparelli and Bob Peak’s poster for My Fair Lady. David Downton proposes a true dynastic portrait of this queen of fashion, style and eccentricity. With this portrait, Palais Galliera pays tribute to a key personality of contemporary fashion. 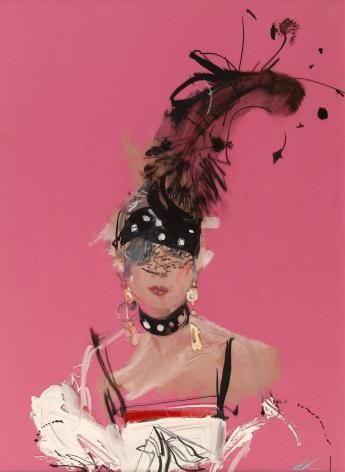