Antonio Lopez (1943-1986), known as "Antonio", renewed fashion illustration in the second half of the 1960s. The genre had abandoned the pages of major magazines at the turn of the 1950s/60s, in favour of fashion photography. At the opposite end of the scale of the haughty and compactly elegant designs of the New Look years, Antonio offers a style in perfect harmony with the revolutions that took place in the fashion world from the early 1960s to the 1980s. His style perfectly reflects the art of his time. If he likes to quote the flat tints of Japanese prints or the line of an Aubrey Beardsley, his production fits, above all, into the aesthetics of Pop Art, at the beginning of the 1970s. He will then experiment with other forms of expression.

Antonio's life is inseparable from his work. Friend of Warhol, Lagerfeld, Saint Laurent or Anna Piaggi, he is one of the many celebrities held between New York, Paris and Saint-Tropez. Often working according to a model, he is the discoverer of models or fashion icons such as Jerry Hall, Pat Cleveland, Jessica Lange, Grace Jones, Paloma Picasso that he draws between two sleepless nights. Paraphrasing Yves Saint Laurent who, in 1968, said that he preferred the notion of seduction to that of elegance, Antonio translates a particularly sensual fashionable relationship. He uses his photographs and Polaroids as working documents for his drawings, which establish a distance that allows him to multiply allusions to a liberated sexuality.

In 1970, he made three drawings - including this one which would be published in Vogue Paris - that reflected all these aspects: sophistication and sensuality of the models, influence of counter-culture, presence of bikers, treated in a homo-erotic way, use of photography with the Saint-Tropez background printed on a coloured film, psychedelic colour palette, association and juxtaposition of motifs largely inspired by Pop Art... The outfits shown here - on the left: Cacharel skirt and T-shirt, on the right: Tan Giudicelli's terry cloth dress for Micmac - indicate the evolution of fashion at the beginning of the decade when the tone was set by stylists and no longer by haute couture alone. Saint-Tropez, used as a backdrop, was, at the time, the place where the jet set, the world of fashion and creation but also the bohemian world mixed and experienced all the freedoms brought about by changes in society. 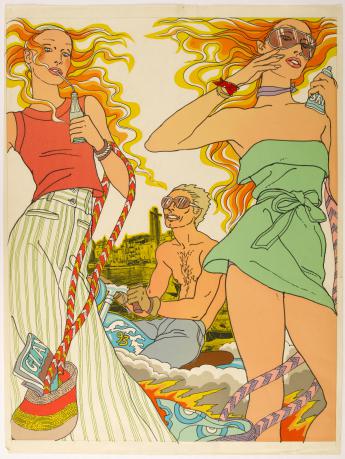