Eloquent testimony to Paul Poiret's role as a fashion precursor, this important piece belonged to Jeanne Boivin (1871–1959), his older sister.

In his memoirs Poiret relates the unfavourable reception given this coat when he completed it for Worth in 1901–1903: 'It was a great square kimono in black cloth, bordered with black satin cut on the bias; the sleeves were wide right to the bottom and were finished with embroidered cuffs like the sleeves of Chinese mantles.' Renamed 'Confucius', it was a great success when Poiret set up shop on his own account at 5 Rue Auber in September 1903.

The dating is confirmed by a photo of the actress Lillie Langtry in Figaro Modes of 15 February 1905 and an illustration bearing the title ‘Révérend’ in Grandes Modes de Paris of March 1905. Its simplicity and fluidity of line are in marked contrast with Langtry's close-fitting dress. The Chinese influences find expression in the ‘Confucius’ title, the embroidery on the collar and the medallions. 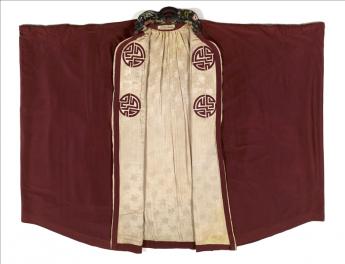