Paul Poiret and André Perugia first met in Nice in 1913, when the couturier spotted the young shoemaker's work in a vitrine at the Hotel Negresco. Despite a very tight deadline, Perugia agreed to make the shoes for Poiret's next collection. The War halted his plans for a move to Paris – the suggestion had come from Poiret – and it was not until 1921 that the elegant ladies of the capital, stopping by Poiret's salon at 26, Avenue d’Antin, discovered the creations of the man destined to become one of the greatest shoemakers of the 20th century. In 1922 Perugia opened his own store at  11 Rue du Faubourg Saint-Honoré in Paris. He went on to design a host of truly original models, often vividly coloured and richly embellished, which were the perfect accompaniment for Poiret's garments. Among them were Arlequinade and Folie, named after perfumes by Poiret.
Part of the wardrobe of Poiret's wife Denise, this pair of shoes was embroidered from an Atelier Martine cartoon. 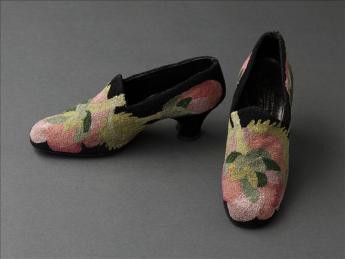