"PARACHUTE" SHIRT WITH HARNESS, INDUSTRIALLY SOILED AND WITH THE EFFIGY OF KARL MARX

Vivienne Westwood and Malcolm McLaren are the leading figures of the punk movement, a major British protest movement of the second half of the 1970s.

Together, they opened several fashion boutiques with the evocative names of Paradise Garage, renamed Let it Rock (1971-1974) and SEX (1974-1976), which offer vintage jackets emblematic of 1950s fashion alongside original creations by Vivienne Westwood.

Labelled "SEX", this shirt dated around 1976 is one of the most emblematic punk fashion clothes, worn by both the shop's salespeople and members of the Sex Pistols group. With its straps, it is inspired by parachute suits and straitjackets. The punks, nihilists, anarchists, make the protest a slogan symbolized by this garment, decorated with an application of a portrait of Karl Marx found in a popular market in London selling souvenirs from Maoist China. 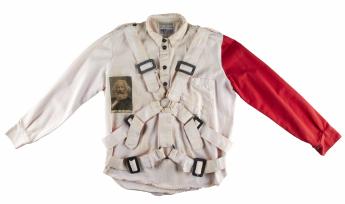