In the work of Paco Rabanne (b. 1934) the visual arts meet haute couture. Before becoming fashion's 'metalsmith', Francisco Rabaneda Cuervo, born in Spain to a Balenciaga chief seamstress and a Republican general assassinated in 1936, fled to France, where he studied architecture and designed haute couture accessories. In 1966 he showed the manifesto collection Twelve Unwearable Dresses in Contemporary Materials with Pierre Boulez's Le Marteau sans Maître as the backing track. In the venerable setting of the Hôtel Georges V in Paris he broke all the rules of the traditional fashion parade, with Boulez's staccato sounds accompanying the passage of barefoot models. Even more baffling for the audience were the clothes, made out of such incongruous materials as plastic and aluminium. This version of modernity, though, appealed to stars of the time like Brigitte Bardot, Anouk Aimée and Françoise Hardy, and this clinched the label's status. By then an international figure, 'BB' posed in this metal minidress for the weekly Paris-Match of 7 December 1968. 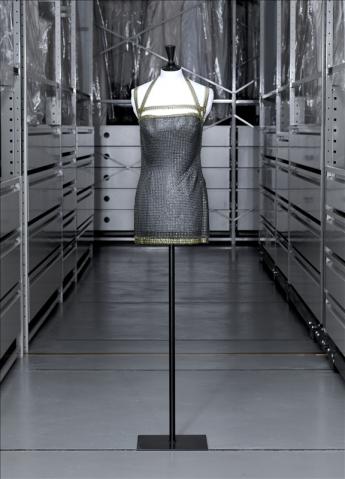